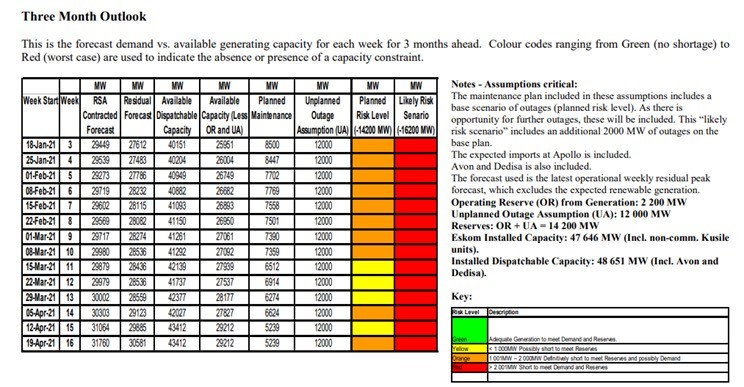 It is apparent that Eskom themselves are aware that there is “likely risk scenario” of load-shedding for the next three months (see above chart).  Not only is it likely but it is also planned for.  So, how can this be?  How can it be that Eskom is incapable of supplying power at a time that the economy is significantly contracted due to COVID-19?

We now again have mud-slinging match on our hands.  Brian Molefe is now blaming Cyril Ramaphosa for the state of Eskom.  Is this sour grapes, or is there truth in it?  Either way, there has been lingering accusations of foul play, mismanagement, corruption and state capture at Eskom for years.

We know, that current CEO, Andre De Ruyter has his work cut out for him if he is going to manage an unbundling of Eskom into three separate entities (Generation/Transmission and Distribution).  We simply can not blame him for the current situation.  He has been dealt these cards, and now has to play the best he can.

Furthermore, Eskom will cripple the post COVID-19 economy if it is unable to deliver and meet the load requirements.  This has dire ramifications and may lead to further contraction of the economy and job losses.

While the rest of the world gear their economies towards renewables (including storage), South Africa continues down the spiral of trying to keep the lights on with an aging coal generation fleet, and new generation fleets like Kusile and Medupi, that have massively overspent on budget and time taken to bring online.

I believe the problem to be far more severe than we are being led to believe.